Ramona Duminicioiu is a member of Eco Ruralis, a peasant association in Romania. In this interview, Ramona explains why the food sovereignty movement is not only about food, and why defending the peasant way of life is in the interest of society as a whole. 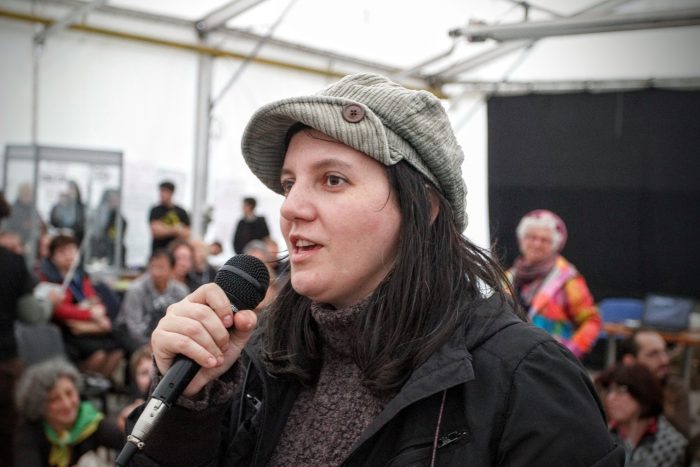 What is the Nyéléni movement?

Nyéléni is the name of a Malian woman. She was a legendary peasant who farmed, fed and cared for her people. Her actions embodied food sovereignty and inspired the world. And so we celebrate her heritage in the food sovereignty movement through her namesake.

The movement’s first gathering was organised in 2007 in Sélingué, Mali, Africa. Besides strengthening the movements’ political power, the forum’s participants sought to further develop the concept of food sovereignty as an alternative policy framework for food and agriculture. Their vision was articulated in the final declaration of the Nyéléni forum on food sovereignty (see box). This declaration served as inspiration for other regions and continents to organise around food sovereignty. Nyéléni forums are important events that unite the food sovereignty movement. At these gatherings we create plans and strategies for actions to counteract problems that we find and define together. Moreover, we strengthen networks to support each other in what works.

The forums are not just one-off events, they are part of a process that builds on previous forums. In 2011 for example, the first European food sovereignty forum was held in Krems, Austria. It gathered all the constituencies that had been working on food sovereignty in the region. There were food producers, peasants, pastoralists, fisher folk, indigenous people, urban gardeners, researchers, organised consumers, and generally people that have knowledge and interest in building a better future for food and agriculture. A European declaration of food sovereignty was created, and based on that declaration we started planning actions together. Five years later, civil society and peasants from La Via Campesina decided to organise another forum. This latest Nyéléni forum took place in 2016 in Romania. More than 40 organisations, including Eco Ruralis, were involved in preparations for the gathering.

Why is the food sovereignty movement important for peasants?

Food sovereignty is a concept that refers to peasant and human rights to food, to choose their food, to produce food, and to shape policies that govern food and agriculture in their regions.

At the moment we feel that decision makers are very far from the reality, problems and difficulties that peasants are confronted with. Peasants are on the frontline of climate change issues and are the first ones to come up with solutions. They are the biggest investors in agriculture, yet nobody recognises this. They are producing and maintaining common goods by administrating land and natural resources in sustainable ways. They are the backbone of society and they deserve to be put in the centre of decision-making.

This is why peasants all around the world needed to create a common strategy and common political framework. We defined it as food sovereignty. It’s not a concept that refers to borders and stipulates that we should produce food only for our own region or country. It´s not a nationalistic concept, it´s something broader and more profound. It truly refers to human, and particularly peasant rights.

What is the role of women in the food sovereignty movement?

Rural feminism is, I would say, an emerging struggle that is gaining shape. I feel that women increasingly come together to share their awareness and insight. With every international meeting women organise special gatherings with impressive participation. Women are putting peasant women in the centre, and others, such as women researchers, are supporting these actions.It´s essential, and we can never do enough work making the role of women for food sovereignty visible. Unfortunately, in the 21st century we still have the essential problem that women´s roles and work are always undervalued. Yet, in this movement women are not left behind, on the contrary, the food sovereignty movement honours women. For example, women have a central role in the Nyéléni forums and we impose equal quotas of participation by women and men. This is a fundamental part of our struggle, as we believe that we can only achieve our goals when men and women first, side by side, solve women´s rights issues.

What can you tell us about the work of Eco Ruralis?

Eco Ruralis was founded in 2009 by a group of peasants from around the country who felt the need to have political representation. We couldn’t find any allies in the unions, or in other organisations. Our first campaign was on protecting our seeds. This is the most practical and inspirational activity that we have. It is the campaign that really brought us together. We still have a lot of genetic resources in the field, and we wanted to act before it’s too late. So we focused on keeping our seeds alive by using, multiplying and redistributing them. We are best known for the seeds which we produce and distribute across the entire country.

Over time we crystalised our vision. We started cooperating with La Via Campesina, and this exposed us to other models of action and organisation with other countries. And so we created two more campaigns. One addresses land issues and the rights to land, and the other is on the rights to markets. Through the land campaign we mostly expose the phenomenon of land grabbing, promote ideas of sustainable rural livelihoods and the rights of people to keep their land in their communities for future generations. Our campaign on markets is just emerging now.

In what way are your campaigns linked to the issue of migration and migrant labour rights?

Many, if not most, of the workers in agriculture in the Western Europe come from Eastern Europe. Cheap labour provided by refugees and migrants is one of the reasons our food can be so cheap. EU agricultural and food processing practice is to large extent based on migrant and refugee labour as well. For example, many Romanian peasants end up in Germany, France, Czech republic, etc. These people very often have their rights violated and they work in absolutely terrible and unfair working conditions.

Land grabbing and the lack of vision from our governments to support peasant farming pose serious threats to the peasant way of life. This, in turn, has many far-reaching implications for society. In contrast to Western Europe, much of the land is still in the hands of family farmers in Eastern Europe. But, Eastern European governments, Romania’s included, have an agenda to attract foreign investors and consolidate land. They spend a lot of public money on this and are blatantly pushing peasants to sell or lease their land. In Romania, subsidies taken from the second pillar of the CAP for rural development are used to entice peasants to part with their land. The land value is still relatively low, so it’s attracting a lot of investors such as multinational companies, investment funds and banks that only use the land in a destructive and speculative way.

As a result, peasants lose connection with their land. When they are looking for ways to feed their children, with few employment opportunities at home and little hope, they feel they have to go to Western Europe. And because we are a country of peasants, most of the people that go abroad work in agriculture. When doing so, peasants lose even more connection with their home and land. This continues to perpetuate the process of farmers giving their land away to companies.

Lastly, can you talk about the public comeback of the word ’peasant’ in Romania?

Let me tell you a story. In Romania, the word peasant was used in a derogatory way for a long time. A few years ago, the national radio asked a representative from Eco Ruralis to give an interview on a farming issue. When they asked how to present her, we mentioned her name and said, ͞’peasant spokesperson’. The radio apologised and told us that pronouncing the word peasant in public spaces is forbidden. ‘Peasant͛’ was associated with negativity, with somebody that is poor, uneducated, rude, etc. These negative connotations came from misunderstanding, from a lack of connection with people that work on the land.

Nonetheless, we have continued to use the word because we know that there are peasants in our fields. Romania is a country where peasant farming is still alive, we have 4.7 million active peasants representing almost half of the peasants in the European Union. It͛s an undeniable reality, they produce our food, even though they are not recognised on the market, nor are they recognised and protected by the social laws.

“The word ‘peasant’ is almost fashionable now. People have remembered what it means to be a peasant.”

But recently this word has been valued again. It͛’s now on the TV, radio and in newspapers –it͛s almost fashionable now. People have remembered what it means to be a peasant. A recent national opinion poll concluded that people associate the word peasant with honesty, hard work and beautiful people. In Eastern Europe we are in the region of peasants. We are in the region of people that know how to produce food. This is very unique and important. Peasants not only know how to make food, peasants know how to fix things, how to build things, how to take care of animals. They are creators of life and this is essential for the future of society at large.

The Nyéléni Declaration on food sovereignty (2007)

The Nyéléni declaration has proven to be a critical statement in shaping food sovereignty as a policy framework. After La Via Campesina coined the term ͚food sovereignty͛ in 1996, there have been numerous gatherings to come up with a shared vision. For this, the first Nyéléni forum has been particularly significant. This was in no small part due to the broad participation of about 600 activists from over 80 countries. The collective understanding of food sovereignty that they achieved is still drawn upon widely today. Key points include: