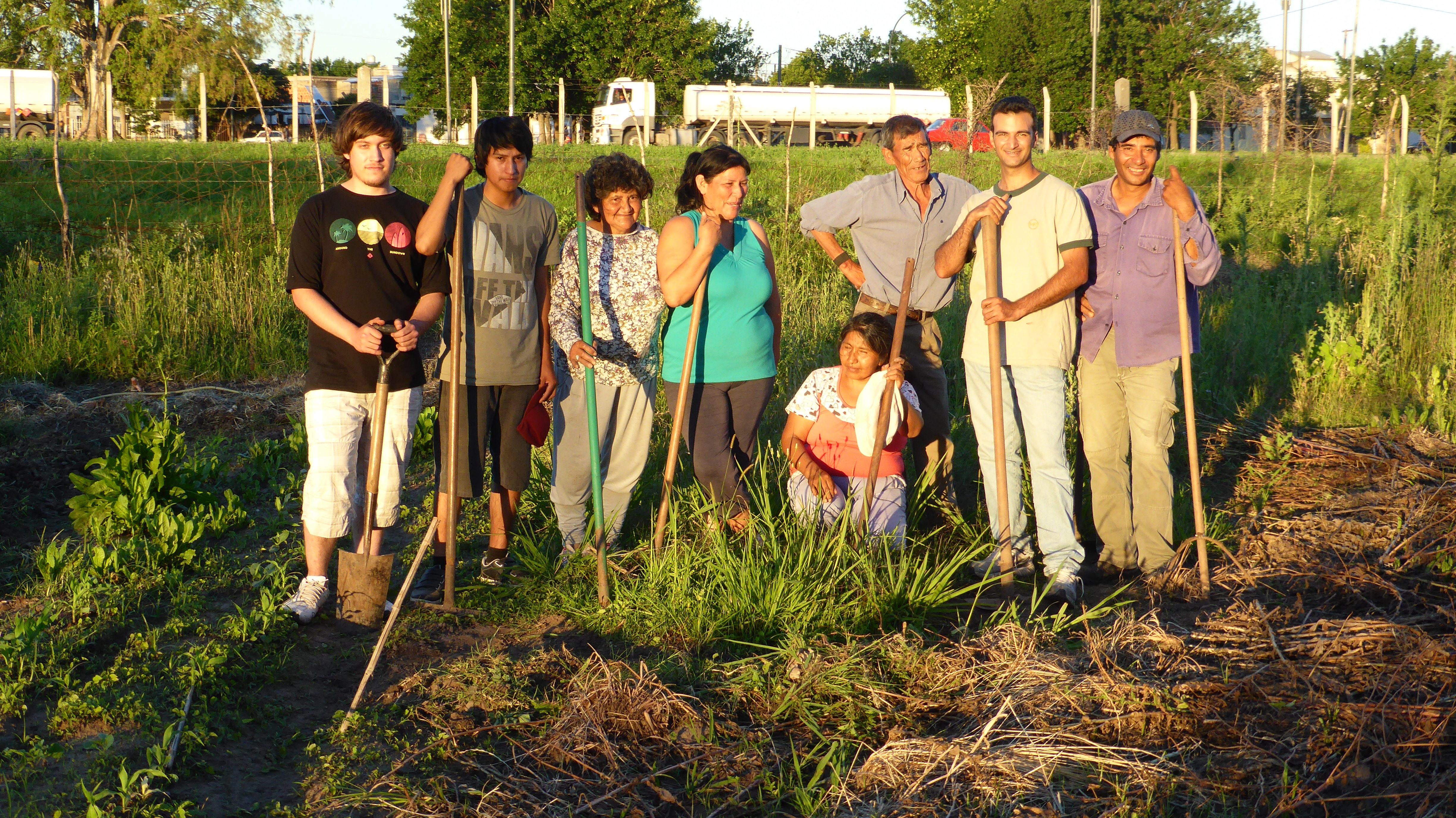 The path to feminist agroecology

Read this article in pdfDownload

Agroecology, food sovereignty and feminism are concepts that together provide a new and critical perspective on food and farming. They can help us to understand the world and push us into action. But what exactly do they mean? And what can we do? Below, we present three critical proposals.

Food sovereignty, agroecology and feminism are often associated with complex political struggles. Some of these form part of our daily lives, and some take place farther away. These three concepts represent a variety of political proposals, especially when they are taken up together. All too often they collide with the cruel realities that we encounter on a day-to-day basis. In other words: even though we may aspire to living in a world based on food sovereignty built through a feminist agroecology, we live surrounded by industrialised agriculture and globalised food in a capitalist and patriarchal world. These are the contradictions we live with.

How feminist is food sovereignty?

The term ‘food sovereignty’ was born from peasant movement La Vía Campesina as an alternative concept to agri-food globalisation. It is formulated as the right of peoples to decide upon and control their food autonomously through peasant agroecology. Agroecology, on the other hand, is an alternative to the green revolution that recovers and builds upon traditional knowledge, manages biodiversity with wisdom and art, and integrates social and ecological aspects into food production. In addition,  agroecology is for and by peasants: the knowledge and know-how of those who grow, raise and produce food creates autonomy for farmers.

Social justice, both for those who produce food and for those who consume it, has always been at the heart of food sovereignty. We might think, therefore, that gender equality is also implicitly present, and that food sovereignty and, by extension, peasant agroecology are feminist. However, the women of La Vía Campesina needed to create their own assembly within the organisation to fight for their participation and to ensure that feminism was taken up as everyone’s issue. Since patriarchy permeates our world and guides our way of life, we run the risk of building a patriarchal food sovereignty and agroecology.

“We cannot assume that food sovereignty and agroecology
are feminist in themselves.”

Typically, those practicing and analysing agroecology ignore gender issues and support analysis in asexual categories (agroecosystem, farm, biodiversity etc.) or in categories loaded with unequal relationships of gender that have been ignored (family, peasantry, community etc.). Advocates of agroecology tend to idealise family farming, the culture of rural and indigenous communities and culinary knowledge, without questioning the deeply unequal gender relations that are hiding in families, farms, communities and kitchens.

Women, in most cases, are invisible or considered as a ‘help’ and not as active protagonists of the agroecological transition. When peasant women do gain prominence in agroecology, production or marketing, they often receive praise. But what about the work overload they suffer in order to achieve what they do? Have they managed to negotiate the distribution of household chores so as not to collapse trying to participate in public and economic life? Indeed: sometimes we fall into the trap of wanting to make the work of women visible and end up glorifying traditional feminine responsibilities without claiming fair retribution and distribution of labour.

The roots of feminist agroecology

Although women’s struggles for resistance and autonomy are timeless, the political formulation of feminism as such has Western roots. The impulse of liberalism and capitalism in the French Revolution, at the end of the 17th century, drove the development of individual and collective rights in a new market-based society, and in the context of private property. Political power was made ‘democratic’ with the establishment of the right to vote and parliamentary representation, but these new rights were reserved only for men. It was at this time that gender conflict was made explicit, and the patriarchy that conceives of women as inferior and at the service of men was revealed.

This analysis, however, has a marked urban, industrial and western bias. In the 1960s and 1970s, the voices of African-American women gained strength and many denounced the dominant discourse on feminism, which had been constructed exclusively from the experiences of middle class, Western white women. These voices were followed by racialised, indigenous and peasant women from all over the world who suffered from colonial domination. From their experiences and visions of the world, they generated their own emancipatory feminist political analysis and proposals.

What we now call ‘intersectionality’ began to be visible, which is nothing more than the crossing of the axes of domination: class, ethnicity, sexual orientation, religion, age and gender. Also, women from different parts of the planet began to construct so-called eco-feminism, denouncing the anthropocentric bias of dominant feminism that does not question the appropriation and destruction of nature and the non-human life that sustains us.  Recently, proponents of the so-called feminist economy of rupture have begun to formulate proposals to build a non-capitalist economy oriented around the ‘ethics of care’ that places life in the center.

To us, the ecofeminism that allies with postcolonial feminism and the feminist economy of rupture is the kind of feminism that feeds agroecology.

A life worth living

Ensuring and demonstrating economic viability of agroecology must be made a top priority. Today it is very difficult to live in the countryside, with rural livelihoods characterised by prevalent job insecurity, lack of decent wages, low benefits, minimal labour rights and heavy workloads. Women are disproportionately burdened by these issues. In addition to being active in agroecological initiatives, they often have other paid work, and engage in care taking. It is therefore important to establish realistic agroecological projects that provide for decent remuneration and dignified lives.

We are all contaminated by machismo and we all reproduce violence, power relations, and gender roles. Do you know how to handle conflicts and emotions in agroecological projects? Indeed, patriarchal relations are present in both the rural and the urban world, including within agroecological initiatives. Realising and acting upon this implies making it a priority to constantly rethink how to deal with these relationships and the violence embedded within them.

“We must question power relations and
break the idealisation of the ‘peasant family’. “

Questions that must be central for anyone building a feminist agroecology are: 1) how to build viable agroecological initiatives that collectivise care work and 2) how to obtain both a decent income for the peasantry and affordable prices for low income consumers.

We cannot resist throwing out some ideas about what to do, although we are aware that both diagnoses and proposals for action and change must be collectively constructed from the ground up.

We think that a first step is to recognise, explain and face the fact that the jobs and roles that women have traditionally performed, both in the countryside and in kitchens, homes, families, communities and in the territories are seen to have less value than the roles that men play. Socially valuing the work of women must also involve an equal distribution of the work they do, making care-giving a collective responsibility of the whole society, and not exclusively of women. This proposal implies, therefore, a democratisation of care work.

A second essential step is to question power relations within the family and break the idealisation of the ‘peasant family’, in order to confront and change patriarchal relations.

A feminist agroecological transition must go hand in hand with changes in relationships and roles between men and women in their homes, building new forms of coexistence. This, together with the equal distribution of care work, would allow women to occupy some of the spaces that are currently taken up by men.

> Address the lack of time through networks

A third step is to strengthen and develop social networks and collaborations with individuals and groups, both in farming and in caring for children or other people. This will help to address the lack of time that results from the ‘productivist rhythms’ of rural communities. Carrying out joint planning, collaborating and engaging in collective work can facilitate care-giving and participation in community life. This can take various forms: cooking, organising a diet adapted to each season, being in a consumer group or campaigning to incorporate organic food in school canteens. This can save time to, for example, conserve seeds, cultivate the garden, take care of animals or process food, without having to increase working hours.

These ideas are based on the thinking behind ecofeminism and decolonial feminism, which place food at the center of our society. In this approach, peasant work as well as domestic work are considered essential for life, thus displacing the current centrality of the markets. For us, it makes total sense to pursue this radically democratic proposal. We believe it is the most promising road to the feminist agroecology and repeasantisation that we need for the food sovereignty of all people.

This is a shortened translation of an article originally published in Spanish in the Food Sovereignty, Biodiversity and Cultures Magazine (Revista de Soberania Alimentaria, Biodiversidad y Culturas), on 05/29/2019.

Marta Soler Montiel is professor of agrarian economics at the Superior Technical School for Agronomic Engineering at the University of Sevilla. Marta G. Rivera Ferre is the Director of the Agroecology and Food Systems Chair at the University of Vic-Central University of Catalonia, member of the IPCC and part of the editorial council of the ‘Food Sovereignty, Biodiversity and Cultures’ magazine in Spain. Irene García Roces participates in the Varagaña Gender and Agroecology Collective in Asturias and co-coordinates the gender module of the master’s degree on agroecology at the International University of Andalucia. Contact: msoler@us.es