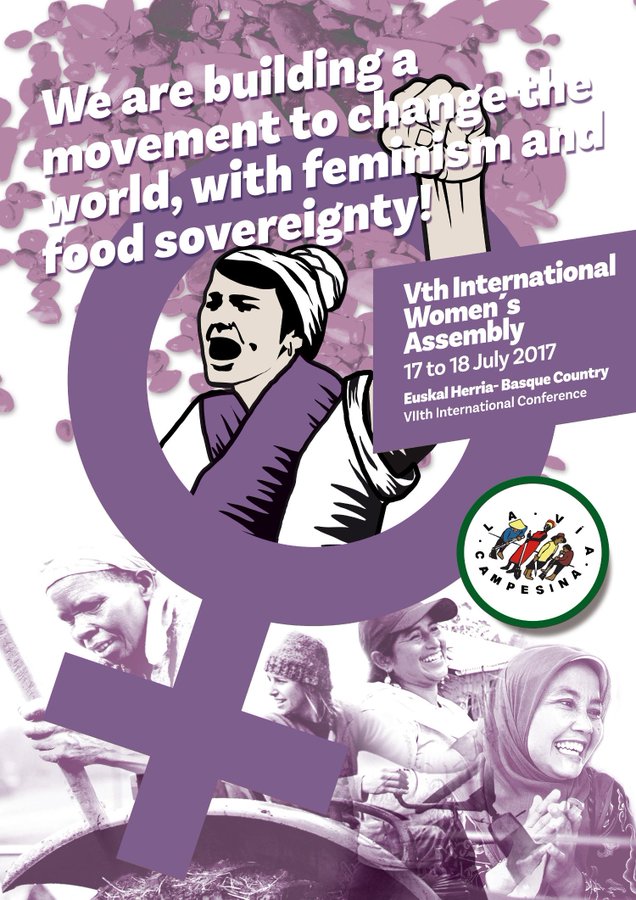 By Cultivate! for La Via Campesina

This post is also available in Español and Français. Photos: LVC

“A really important part of being women in La Vía Campesina is to identify ourselves and our various struggles” emphasized speakers at the start of the V Women’s Assembly taking place in Basque Country on 17 and 18 July 2017. The peasant women highlighted various aspects of this identity, including women’s care for the land, the seeds and the ecosystem and their fights against patriarchy, the sexist system, and violence. They took advantage of their unique gathering to advance their collective understanding of how to fight for food sovereignty with feminism.

The discussion on feminism within La Vía Campesina started at the foundation of the movement in 1993. A peasant leader from the Chilean women’s organization Anamuri told her audience how this discussion evolves around gender equality and the fight against cultural and sexist prejudice. Importantly, she said, this fight is rooted in values of equality, social justice, and solidarity- values that are fundamental to peasant women’s political struggles. “We are building hope and generating energy that way”, she expressed.

How the peasant women are doing this, can be seen around the world. In India, the widows whose husbands committed suicide and are left behind with not only major grief but also large debts and additional work, are organizing themselves as part of La Vía Campesina’s member KRRS. In Sri Lanka, women are taking up a big role in promoting agroecology and are called ‘the scientists of the soil’ because they are converting salty land to fertile ground. They have set up their own structure as part of MONLAR, a member of La Vía Campesina. In the U.S. and in Europe, many of the young people who are going back to the countryside and developing innovative farming and commercialization practices, are women. And in West Africa, women are the driving force behind La Vía Campesina’s newly established agroecology schools.

At the global level, La Vía Campesina’s firm alliance with the World March of Women helped to advance the feminist agenda. The movement also devised a mechanism for the participation of their women representatives in the Civil Society Mechanism of the Committee on World Food Security. Commenting on this last achievement, a farmer from Spain said, “Governments are not looking at these gender parity issues but we women need to, in order to take control of our land and our lives!”

Women leadership in the movement

Part of the struggle for equality has to do with decision making processes within the movement itself, for which the women are making achievements after years of hard work. In the political bodies of the Latin American coordination of La Vía Campesina for example, there are now more women than men in the leadership. And its members in Africa set up a regional coordination structure to explicitly bring women into the decision-making processes. At La Vía Campesina’s International Conference in Bangalore in 2000, an important step was made as that Conference achieved gender parity: there was an equal number of women as men peasants present. Since then, each member organization is required to delegate an equal number of men and women to the movement’s international gatherings.

While there are many men who recognize the importance of such sharing of political responsibilities with women, there are also those who don’t. “Some men see each step we achieve, each right that we manage to hold up, as a loss of their privilege, including our own comrades”, one speaker shared. She asked: “How will we continue advancing real parity and internal policies for women’s rights at every level of our organizations?”

And then there is the challenge of bringing such resolutions into practice. Some women were frank in expressing that sometimes great commitments are made, but that “the realities are entirely different when we return to our homes, our organizations and our daily lives.” The Euskal Herria Declaration, adopted at La Vía Campesina’s International Conference after the Women’s Assembly on July 22, 2017 reiterates the movement’s commitment to strengthening the political participation of women “in all spaces and levels of our movement.”

From gender parity to feminism

So while gender parity is increasing in La Vía Campesina, in many cases it exists more on paper than in practice, and by itself it does not guarantee equal participation in decision-making. The women gathered in Basque Country emphasized that gender parity needs to be accompanied by other aspects for equality to become a reality, beginning with the establishment of women’s chapters within member organizations, accompanied by an adequate budget and political training from a feminist perspective for both men and women. Indeed, the struggle for feminism is not just of women but also explicitly of men, the peasants emphasize, although it has taken time and effort for everybody to understand and accept this.

Acknowledging all this complexity, participants of the Women’s Assembly reflected on what feminism means in the context of the peasant struggle, as it is often regarded an urban, and sometimes ‘Northern’ issue. Rural women from around the world feel they fight a particular struggle and therefore have a particular role to change that vision of feminism. They recognize that they live in communities, farms, families on the countryside that are shared with men, and that “our version of feminism has to be about creating good, safe spaces within that context”. A young peasant leader from MST in Brazil offered: “For us, feminism means changing relationships between people and nature and between men and women. Our work on the farm must be valued, while the work of the home cannot be the exclusive burden of women. We must construct new values and new relations in daily life, in society and within our organizations”.

Taking this idea further, over many years the Latin American and Caribbean members of La Vía Campesina collectively developed the concept of ‘popular peasant feminism’, rooted in the particular historical context and form of peasant women struggle in that part of the world. They explained that this concept comes from an understanding of feminism as a struggle against the capitalist system: “Men are not our enemy. Our enemies are capitalism, patriarchy and racism, and our peasant feminism is key to fighting these.”​

A peasant from Europe remarked that the concept of feminism goes beyond the idea of dividing people among women and men—it includes the diversity of human beings, including those who do not identify with such a binary construction.” This notion is part of the feminism that we want to build”, she said. “Sexual and gender diversity needs to be embedded in our concept of food sovereignty.” The movement’s growing support for the rights of lesbian, gay, bisexual, transgender, queer and intersexual people (LGBTI*) is evidenced by its commitment laid out in the 2017 Euskal Herria Declaration to increase its capacity to “understand and create positive environments around gender within our organizations and in our alliances”.

The Declaration also calls for an end to all violence against women, whether physical, sexual, psychological or economic. Understanding the role of violence and power in the movement’s struggles is key, as explained by a farmer from Canada at the Women’s Assembly: “In a patriarchal system, power means power over. Women don’t want that – they are afraid of it, and for good reasons. When we as women speak of power, we mean power with, so we see struggles not as violence but as a way to reconstruct the map together. We have to advance power with, and our struggle needs to be for the living, beautiful, just, and solidary world. That is a huge political project, but it is doable.”

Building on the solidarity of peasant women

The movement made great strides in understanding the role of feminism in its struggles. In its 2017 Euskal Herria Declaration, it explicitly underlines its “feminist character” and commits to constructing a peasant feminist movement within La Vía Campesina.

The women emphasized how important it is to connect with each other in order to build feminism in the peasant struggle. A women from the National Family Farm Coalition in the United States said: “In North America we struggle with racism and sexism every day. As women farmers we are humiliated, but we are standing with you, other women from around the world and here we are learning how to fight together.” She read a moving text from the Alabama declaration (see below).

The Alabama declaration of women farmers in North America

We are women,
We are leaders in the movement of LVC North America
We lead with a women’s heart with love and respect for all life, concerned with the children and their future.
We are nurturers of land and community
We treasure the gifts of the soil and our ancestors before us.
Food, its production, its preparation and its defense, brings us together.
We are builders of community and food sovereignty, whether we have been here for generations sojourning here or beginning of our journey- we are one to protect what is necessary to us, our families, and peasants around the world.
We fight and stand together with all who believe that it is the people that produce and eat the food that know and can be trusted to guard our land and future.
We dress to meet the challenges of the day: soil on our hands, boots on our feet, ink on our fingers and lights in our eyes.
We work until the work Is done and then to sleep, to be ready to grow and lead another day together.
No walls between us, the campesinas of Mexico, Canada and the United States.