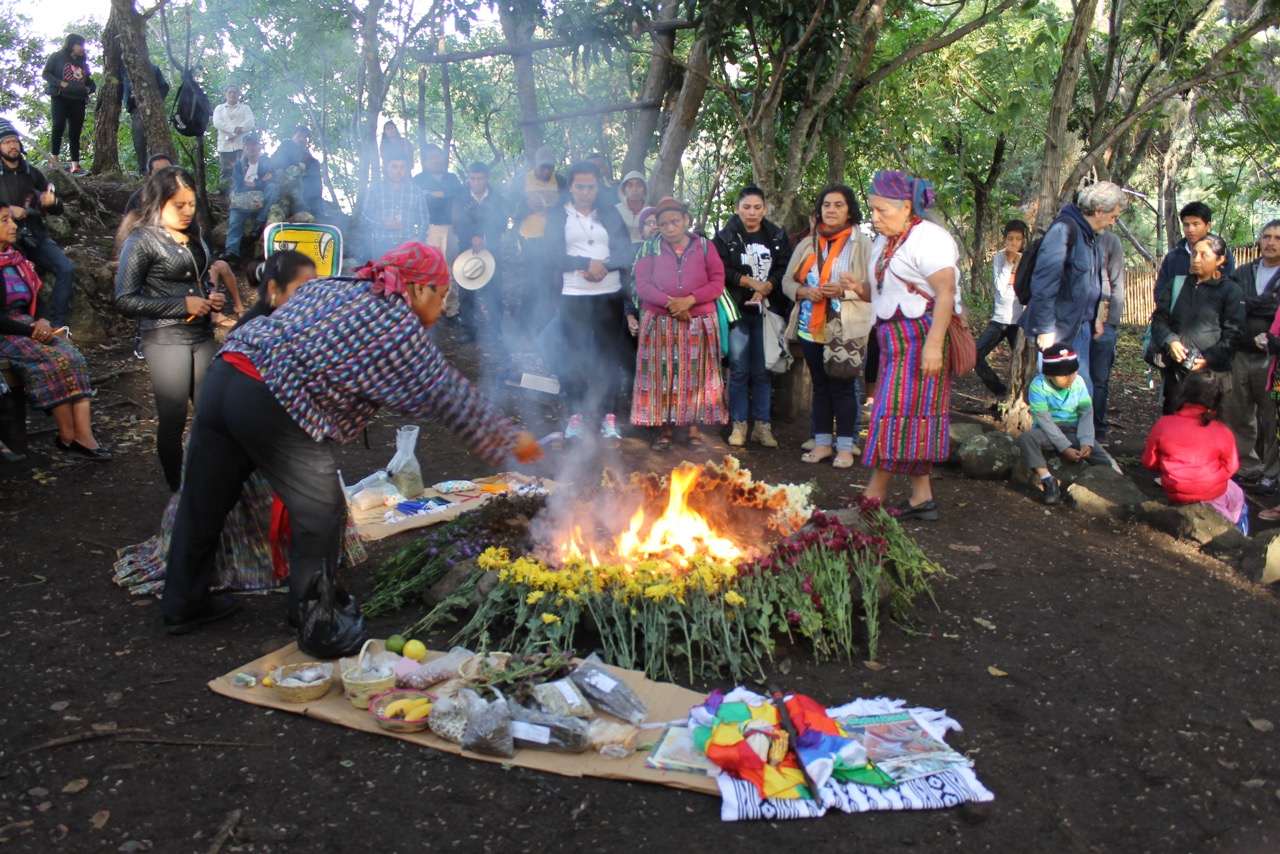 Read this article in pdfDownload

According to the worldview of the Maya indigenous people in Guatemala, as humans we are a part of the natural cycles of life. Colonisation and industrial agriculture broke this harmony through capitalist agrarian policies, land dispossession, violence against women and war. Today, women are working with agroecology in their communities to recover traditional values and rebuild connections with land and food.

From the perspective of the Maya indigenous people, who make up the majority of the population of Guatemala, agroecology is a system of life: a system that protects different varieties of seeds and diverse agricultural practices where all the vital elements of nature converge and synchronise harmoniously. Grandfather Wind, Grandmother Water, Grandfather Fire, Grandmother Moon, Grandfather Sun, Mother Earth and Father Heaven comprise the family that gives life to our planet Earth. The synchronisation of these elements with people enables a form of agriculture in which everyone is connected. One element cannot live without the other; each fulfills many functions that are sustained by other elements. This way, mother nature generates products that nourish not only living bodies but also the spirit of life.

Women have always played an important role in agriculture and in protecting this delicate harmony with nature. In a traditional Maya story of how agriculture was domesticated, women were the first to plant and harvest their own food.

How agriculture was domesticated – an ancient Maya story

There was a time when women longed to find a way for their husbands to not always have to go out hunting, but they could not think of anything that could keep them at home. Being nomads, they settled in places where they saw the opportunity to stock up on food and water. In one of these stops, during the rainy season, the men did not go hunting for a long time.

As usual, the women always had a place near home to throw away kitchen leftovers, like a compost pile. In that place they also dumped animal waste, such as manure. The manure contained seeds of different varieties, but the women, accustomed to the hunter-gatherer lifestyle, paid no attention to them.

Then, at one point one woman realised that with the recent rains, various seeds thrown into the compost pile had begun to germinate. Noticing the seedlings, she decided to transplant them one by one in the patio around her house, curious to know what they would develop into. Every day she approached the seedlings and spoke to them with affection. She gave them constant attention, had a lot of love for them and watched them grow.

As the days passed, the seeds grew into many different kinds of plants because the woman had thrown a great diversity of seeds in the compost. Some seeds were vegetables, others were fruit, others were precious timber varieties that were found in the mountains. This is how the woman discovered that all plants in the mountains grow from seeds, in some cases even very tiny seeds. She told her husband to look for seeds to sow close to home, showing him what she had discovered. The man, shocked at what was happening with the growth of the seedlings, happily told his wife that her idea was great. From that moment on he would spend his time searching for seeds and helping his wife plant the seeds nearby the house.

The woman also told her husband that instead of hunting animals, it would be better if he could look for baby animals to raise at home. That way, they could have various foods close to home without the need to go hunting. He did this and also began to look for a diverse array of seeds, including medicinal plants, trees and fruit and vegetable varieties. This is the Maya story of how agriculture was domesticated through women.

The rise of modern agriculture

Until the 1940s, cocoa beans were used as a form of money in Guatemala. They were regarded as highly valuable, and they were also offered to the gods for their exquisite flavour and other properties. Likewise, trueque (barter) practices were very common. Families exchanged their harvested agricultural products, for example trading corn for herbs or beans for eggs.

However, over the last century, everything changed. Sadly, with the imposition of the current economic model in the 1940s, agriculture was brought within the market system and its role within society became commercialised. Food, once produced for healthy meals, is now produced for trade and profit. From the 1950s and 1960s onwards, agro-industrial companies emerged. They considered themselves owners of the country, invading and seizing land from indigenous and peasant communities to practice large-scale agriculture.

Starting in 1960, Guatemala suffered 36 years of civil war, centered around the fight for the control of politics, economic power and land tenure. Many peasant and indigenous communities were tortured and massacred and their houses and villages were burnt down. The government, the army and the security forces applied the ‘Scorched Earth’ policy, which consisted of violently removing rural crops, houses and people. Indigenous peoples’ and peasants’ property documents were erased to pave the way for land appropriation.

The exploitation of peasant and indigenous women

During over three decades of war, thousands of women died after being raped by soldiers and tortured in many ways. Their breasts were cut off so that they could not breastfeed their children and babies were extracted from their wombs. Peasant and indigenous women were considered the enemy, as they represented a connection with life and with the land through their knowledge, practice and ability to create and nurture new life; new peasants who might rebel against those in power.

Indigenous and peasant families were left without land and without the conditions necessary to lead a decent life. They had to look for landowners willing to provide accomodation in exchange for farm labour, providing landowners with the attractive prospect of free labour.

Essentially, peasant and indigenous communities were pushed into slavery in order to survive. Again, women suffered most. Landowners preyed on their vulnerable situation to force women to have sexual relations with their bosses. Refusing meant families risked being evicted, stripped of their homes, or having more or heavier work imposed upon them. Landowners did not see women as human beings, but rather as sexual objects.

While these extremes are behind us, violence against rural women has not disappeared. Human rights, especially those of peasant and indigenous women, are often violated by elite groups and large corporations in Guatemala. Municipal, departmental and national governments bow to their demands, since they are the ones who finance their political campaigns, helping to maintain a system of exploitation, submission and inequality.

In the period our Maya grandmothers and grandfathers tell us about, agriculture was a cultural practice in which women, men, the young, the old and children could participate without discrimination. One of the most important goals of REDSAG, the National Network for the Defense of Food Sovereignty in Guatemala, is to revive this practice and defend the rights of women in food sovereignty.

Breaking with the racist and patriarchal system underpinning our society is a great challenge. However, we are making an effort to do so by restoring the balance between women, men, fauna, flora and the elements from the perspective of the Maya worldview that our identity is our history and our history is our identity.

Years of living in patriarchy and civil war have deepened inequalities. However, agroecology is rooted in the belief that everyone can sow, work the land, harvest and cook agroecological products from their own plots. We believe that by enabling this, we are working towards a more equitable distribution of the heavy domestic workload. Sometimes women in the communities participate in meetings, while men take care of the family. There are men who have learned to cook and take on this work more often at home than before. These are important changes. Little by little we are raising the necessary awareness to transform the realities of women. REDSAG raises awareness through training in schools, churches, with the media and through political advocacy. It is an arduous but necessary task;  we are working towards national adoption of public policies that protect women’s rights.

At REDSAG we are also training women as agrofeminists whose focus is to preserve and promote healthy, cultural, traditional and ancestral knowledge, and to raise our voices together in defense and protection of our natural assets. We are establishing creole and native seed banks in all the country’s territories. We aim to build capacity in the domain of agroecology and community economy for both men and women, propelling men to give women the space that they deserve, and that they continue to fight for.

From the Maya worldview there is an understanding that men and women possess the same rights. They are complementary; the equilibrium of a harmonious life system that is in balance with all the life systems that surround us. Only by reviving and protecting the ancestral knowledge and practice of our grandmothers and grandfathers will we be able to respect everything that surrounds us and connect to our own traditional ways of interacting with the ‘spiritual knowledge’ of the planet.