Four decades of communism and an overnight transition from socialism to the free market caused dramatic shifts in food consumer – producer relationships across Eastern Europe. In the Czech Republic, a history of cooperatives and local food production contrasts with today’s situation, in which the country is almost entirely dependent on international trade and supermarkets. But in response, parallel, independent initiatives of community supported organic agriculture are on the rise.

Historically, Czech society was characterised by strong cooperative structures. Cooperatives (co-ops) helped small and middle scale peasants and autonomous traders attain economic emancipation from the Austrian Empire. Starting in 1847, with the establishment of consumer / savings co-ops in Prague, the Czechs quickly developed a culture of co-ops, inspired by the British Rochdale Society of Equitable Pioneers. For example, villages received electricity due to co-ops; the Prague Zoo and National theatre were founded as co-ops, and of course there were very important agricultural and consumer co-ops.

The rise and fall of co-ops

However, with the introduction of communism in 1948, the culture of co-ops lost its positive aspects of bottom-up engagement. The centralised, state-dictated way of decision making was detached from the day-to-day reality of the consumers and peasants and many people stopped farming and left the rural areas.

After the Velvet Revolution in 1989, which ended 41 years of one party rule in Czechoslovakia, the state introduced a new law on co-ops, enabling them to function independently again. However, embracing the competitive ideology of the free market rendered many of the remaining co-ops obsolete or a relic of the communist past.

Since 1991, when the very first international supermarket opened in the Czech Republic, the country has witnessed an ‘invasion’ of international retailers and supermarkets with their aggressive and predatory politics of unfair trading practices. This led to the disappearance of hundreds of small and middle scale food producers, and to the concentration of distribution channels and food production in the hands of a few industrial companies. Today, initiatives providing alternatives to this model of production and distribution are needed more than ever. 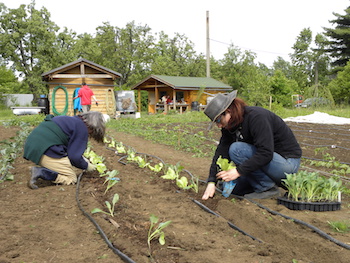 The CSA movement is currently the strongest alternative food movement in the Czech Republic. The very first communal project that was built on the values and principles of the CSA model in the Czech republic is KomPot (www.kom-pot.cz). KomPot (translated as ‘Communal Foods’) was established in 2011 by a group of organic farmers, environmentalists and local people from the peri-urban area of Prague. The aim was to feed at least 50 families with organically grown fruits and vegetables from a community-led market garden based on solidarity between producers and consumers.

It was a challenge to get this CSA started because there was very little infrastructure, support, and awareness about alternative food systems. The country’s recent history has led to skepticism and distrust around collective action and consensus-based decision making. And, operating without subsidies made it difficult to make investments in materials such as water wells and polytunnels. But, Jan Valeška, one of the founders of KomPot, explained how CSAs are becoming more popular in Czech: “Every year there are newcomers starting their CSA systems. Today, there are up to five dozen CSAs across the country, with several thousand members.” The CSAs in the Czech Republic are an example of an alternative model for food production and distribution based on building community, trust and direct contact between consumers and producers. Equally, it is about restoring a lost connection with the land and food.

A reflection on Eastern Europe

Many other Eastern European countries still harbour a live rural, peasant culture. Unfortunately, due to land grabbing, intense pressure that food producers experience from the international retailers, and the dominance of industrial agriculture, small scale farming is disappearing.

Czech fruit and vegetable growers, for example, rely mainly on migrant labour from the Ukraine, Romania and Bulgaria. Czech apples are often being picked by Romanian hands, those same hands that used to grow fruits and vegetables in Romania (see interview). On the other hand, every year Czech workers are leaving for Britain, France or other western countries to pick wine grapes or to work on farms.

Completely unprepared, Eastern European countries adopted economic models and neoliberal strategies that are still difficult to digest and cope with, especially for the smallest farmers, and for consumers whose options are restricted. But, while our countries share common challenges, we also share a common vision of possible solutions. These solutions are being recognised by more and more people. The CSA model is one way of providing stability, not only for small scale producers, but also for consumers. Producers and consumers are becoming co-actors in the whole process, from production to processing and distribution of food. The result is a transition towards localised, sustainable practice and dignified living conditions. That is the message from CSA communities in the Czech Republic that sprouted from KomPot.

Tomáš Uhnák (t.uhnak@gmail.com) is a freelance journalist and food sovereignty activist working in Czech republic. We would like to thank Jan Valeška for his input to this story.