The exodus of young people is one of the main problems of rural communities in Mediterranean Europe. The declining rural population is counterbalanced by migrants that have come to live and work in the countryside. Paradoxically, it is thanks to migrant shepherds that ancient pastoral traditions are kept alive and productive. But there are many challenges that need overcoming before pastoralism returns to the resilient and sustainable sector it once was.

Vullnet Alushani immigrated to Italy from Albania in 1999. There, he began working for the Bramante, a traditional Gargano Podolico Caciocavallo producer in the Apulia region. Caciocavallo is one of the special Slow Food cheeses made from the milk of Podolica cows – a breed once common throughout most of mainland Italy. The breed is now restricted to some regions in Southern Italy. It didn’t take long for Vullnet to learn and master the skills needed to produce Podolico Caciocavallo. He is not only appreciated for his extraordinary cheeses but also for his contribution to carrying on the tradition of the Bramante family.

The rural world, the cradle of socio-cultural traditions, local identity and Euro-Mediterranean heritage, survives and evolves thanks to the presence and contribution of immigrants like Vullnet. Nowadays, flows of immigrants from other Mediterranean pastoral regions contribute significantly to tackling the social and economic mismatch of the rural labour markets. They do so by filling the gaps left by the national population. Despite the policy and financial commitment of the European Union through its Common Agricultural Policy (CAP), the decline and ageing of rural populations is a major concern for policy-makers at different levels. This rings even truer for mountainous areas where pastoralism plays a primary socio-economic and ecological role.

The typical profile of a migrant shepherd in southern Europe is a man aged between 25 and 40 and native to another Mediterranean country (predominantly Romania, Morocco, Albania or Macedonia). History, language, and migrants’ networks have shaped the different migratory patterns. Romanians are found mostly in Italy and parts of Spain, Moroccans in parts of Spain and southern France, and Albanians in Greece. Although not always from a pastoralist background, most of them come with previous experience in animal breeding. Sociocultural differences aside (e.g. Orthodox or Muslim in predominately Catholic societies), these shepherds are generally appreciated for their technical skills, as well as for their endurance, flexibility and adaptability. Fiorino, a Romanian shepherd explains: “We are organised and upon demand we can seek for more workers from our networks, mostly in our villages in north-eastern Romania. There, everybody used to keep sheep. Most households produced their own cheese, that is where we have learnt. We know how to deal with sheep.”

Despite its many benefits, immigrants lack some technical knowledge. Coming from nations with different policy frameworks, immigrants often lack knowledge of CAP and related agro-environmental measures. Depending on their background, they might not be familiar with the adequate management of large herds, forestry resources, wildlife presence and relationships with protected areas, as well as farming plots of their host communities. Training and education programmes, such as the existing pastoral schools in France and Spain could be one consistent way to fill these gaps (see page 37). Extending and connecting these experiences would also enhance discussion about and promotion of this sector.

But the working and living conditions of immigrant shepherds are concerning in most cases. The contractual conditions are often informal or partially legal with monthly salaries typically lower than 1000 Euros per month for fulltime engagement.

Opportunities for migrant shepherds to improve their socio-economic status are very limited, even after many years of operating in this sector. In this respect, there are few examples of immigrant shepherds that have graduated as independent livestock owners or dairy entrepreneurs. Lack of financial resources and limited access to land and credit are the main factors inhibiting the capacity and the interest of these workers to remain in this sector. This is exacerbated by constraints related to residence permits, entrepreneurial licenses and overall citizenship rights, including compliance with CAP procedures and rules.

To address these constraints, sometimes immigrant shepherds partner with local ones. For instance, 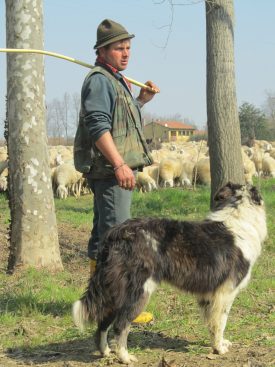 Mario, a Romanian shepherd, came to Italy ten years ago. Initially, he worked without a contract or insurance. Seven years ago, he got a contract which finally made him eligible for Italian citizenship. Italian citizenship is needed to register as an entrepreneur and to legally own a flock. With his savings he was able to accumulate a few animals each year, which he kept within the flock of his employer. Recently, he and his employer have been talking about jointly managing a common flock. They plan to share the costs and responsibilities, as well as the profits. With an established business, Mario will be able to bring his wife and children to Italy.

Importing the future
Other examples of such socio-economic graduation exist where two immigrants have shared resources and responsibilities or in areas where pasture lands are communal and therefore more easily accessible. Yet in general, this is a lose-lose situation. Migrant shepherds do not evolve in their socio-economic role and elderly livestock owners do not find people capable of taking over their herds when they retire. According to FAO, about one quarter of the EU flock has been lost in the last two decades. The disappearance of pastoral flocks and the abandonment of pasturelands has environmental and socio-cultural repercussions that impact society at large.

For many reasons, keeping pastoralism alive is key to ensuring that large parts of the Mediterranean remain vibrant and productive. As a main source of income and employment in mountainous and arid areas, pastoralism contributes to managing the rich yet fragile natural resource base. Thus it plays a crucial role in maintaining local landscapes, identities and socio-cultural heritage.

Yet without decent living and working conditions for today’s shepherds, the future of pastoralism is uncertain. Therefore, rural development actors should pay more attention to the potential for integrating immigrant shepherds as tomorrow’s livestock keepers and dairy entrepreneurs. This would also help tackle depopulation and abandonment of difficult territories, and support activities that enhance their sustainable management – the goal of most national and European policies.

Sustainable pastoralism will not be merely the result of subsidies and incentives, but rather the outcome of a comprehensive, integrated policy framework, including the review of agricultural, trade, migration and labour market policies. And together with the development of tailored initiatives and adequate investments. The viability of shepherding, the attractiveness of mountainous areas, the profitability of extensive livestock production along with efforts to support integration of foreign shepherds are the key challenges for the future of an ancient activity that is vital for the Mediterranean identity and for the resilience of its territories.

Migratory flows have long proven to be an important factor for resilience and sustainability of pastoralism, as well as crucial for keeping these territories productive. Rural succession in pastoral areas based on immigration is not new in the Mediterranean. The 20th century has witnessed a number of migrations of pastoral communities within the region. Sardinians colonised abandoned pasturelands in central Italy, Piedmont’s shepherds moved to work in the French Provence, southern Spanish herders moved to graze the Pyrenees, and Valach and Arvanite shepherds moved throughout Greece.

Michele Nori (Michele.Nori@eui.eu) is a Marie Curie research fellow at the Migration Policy Centre, European University Institute. Within the framework of the TRAMed project, he investigates the presence and contribution of migratory flows characterising contemporary pastoralism in Mediterranean EU. This article was first published in Farming Matters, December 2016.