The 2nd European Forum for food sovereignty took place in Cluj-Napoca, Romania between 26 – 30 October 2016. The Forum brought together over 500 delegates from 43 countries, among whom members of Cultivate!.

With other delegates we shared experiences in building healthy food and farming practices, developed a common understanding of food sovereignty, discussed strategies to relocalize Europe’s food systems, and explored how to influence key policies in Europe. 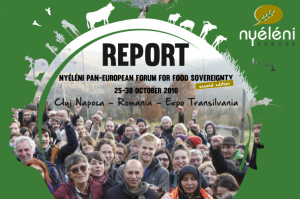 The gathering, named ‘Nyéléni’ after a conference centre in Mali where the international movement was launched in 2015, was an important stepping stone for building a strong food sovereignty movement in Europe.

Curious what we discussed and decided? Want to join the movement?