Supporting connections and relations among food producers, urban people, students, policy makers, artists and others is at the heart of agroecology for sustainable, just food systems. Cultivate! co-hosts learning events, brigades, caravans and other exchange processes, aiming to strengthen territories in advancing healthy food and farming systems rooted in agroecology. In our own territories, we help make connections between those who eat and those who produce, between practice and policy and between the academic and the peasant world. Here is a selection of our current activities.

In Eastern Europe and Central Asia, peasant organisations are strengthening agroecology and peasant seed systems through cross-regional exchanges, with an emphasis on supporting the leadership of peasant women. They have come together to share their diverse experiences and expertise in agroecological trainings, movement building and advocacy. Cultivate! is collaborating with the European Coordination of La Via Campesina (ECVC) and FAO-REU to bring these organisations together to learn from and inspire one another. They link organisations to existing networks, encouraging networking between initiatives and facilitating horizontal peasant-to-peasant learning processes with a special focus on the inclusion of women. From this collaboration a strong, resilient and structured network is emerging in Eastern Europe and Central Asia, which is capable of advocating for food systems based on agroecology and local seeds in national, regional and international policy making arenas.

> Building a feminist network of agroecologists in Spain

In Spain, agroecologists come in all shapes and sizes.  A vibrant agroecology movement has taken hold both in the rural, as well as urban Spanish landscape. Women involved in this movement, including farmers, consumers, organisers and researchers, have come together to build a feminist network to claim space for feminist principles within agroecology. Jessica Milgroom of Cultivate! supports and participates in this network.  ¨Without feminism, there is no agroecology!¨

> Weaving together producers and eaters in the Netherlands 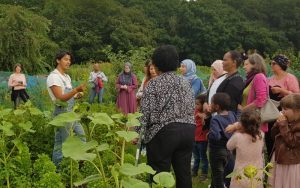 In the wider region of the city of Wageningen in the Netherlands, members of Cultivate! support a network of agroecological food producers, caterers and shops. The network has established novel governance arrangements and practical collaborations that weave it together and link it with other societal actors (such as consumer groups, local governments and academics). Both Chris Chancellor and Janneke Bruil of Cultivate! are playing an active role in the network. Read more

Hurricane María hit the Caribbean so strongly in September 2017, that the vegetation went from lush green to dark brown in a matter of hours.  The state government has demonstrated an almost complete lack of support towards ecological farming. In order to support agroecological reconstruction, Georges Felix of Cultivate! is teaming up with local and international organisations in a series of solidarity brigades called the Guagua Solidaria.  The brigades take the form of moving camps, with brigadistas from all over Puerto Rico, the US, Canada, Central America and Europe spending 3-4 days in each farm rebuilding farm structures, houses and planting. Spaces are incorporated for political training, dialogue, workshops, cultural exchanges and reflection. Exchanges like these not only help farmers get better positioned to confront the next hurricane season(s), but also help bolster the movement work of organisers, educators, activists and farmers that often spills over beyond a farm’s perimeters into diverse communities and across many issues. Read more