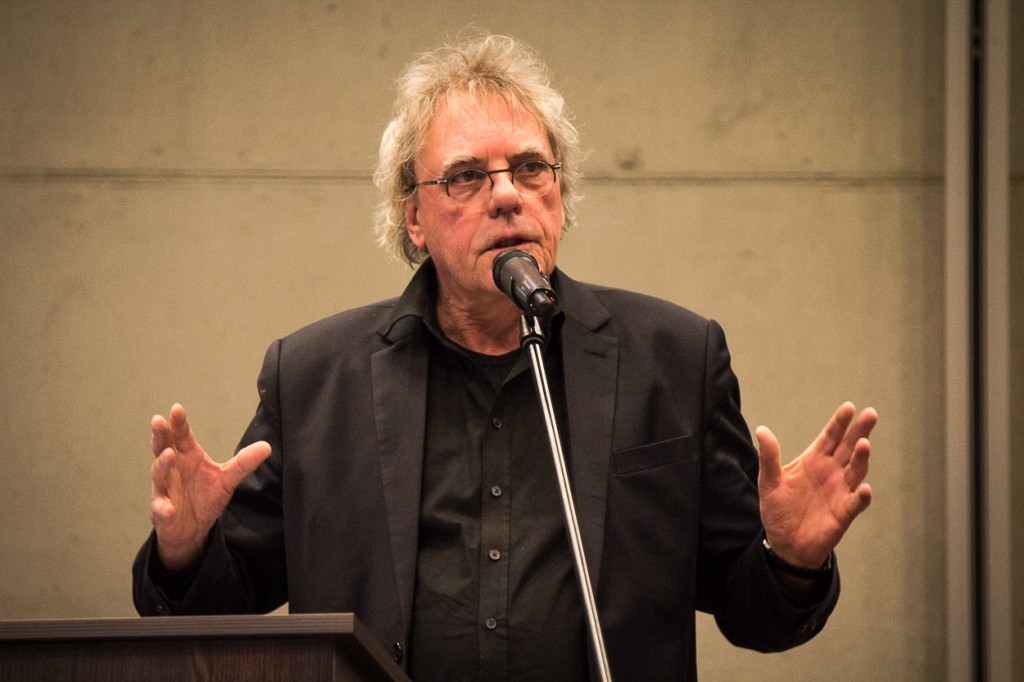 Whereas yield increases are considered central in modernised agriculture, they can be seen as just one element of impact in peasant farming. In assessing their farms, peasants depart from the specificities of their farm, the ecosystem in which it is embedded, and the community, markets and family dynamics in which they operate. If society is able to apply a similar view, it will understand that peasant-led agroecology is not only a promise but a necessity for today and for the future.

At the heart of peasant agriculture there is a range of complex and interdependent cycles of observation, interpretation, readjustment, evaluation and learning. Peasants continuously observe the germination of seeds, the development of crops, and the performance of animals, amongst others. Changes they observe inevitably trigger peasants to ask how and why, which in turn prompts analysis of previous decisions as well as internal and external factors.

Is the calve that looks so promising to be explained by previous decisions regarding the selection, mating and more generally, the genealogy of the animal? Or is it due to the feeding she got so far? Or maybe the absence of diseases? Or the effect of a new, more healthy stable? Peasant farmers ’read’ the dynamics and impact of their own encounter with living nature, or farming, in a twofold way. One way is immediate, short term and applies at the micro level. But farmers also look at the long term, which involves considering the interaction between farms, markets and wider society as well as the role of cooperation. Farmers weigh the possibilities to improve the availability and quality of on-farm natural and social resources and assess what is needed to do so. Both resource use and resource development are taken into account. 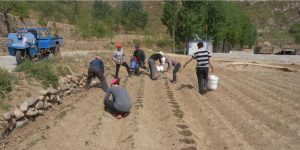 Diversity is central to peasant farming. From observing and analysing this diversity, peasants improve and innovate. This logic governs the selection of seeds and animal breeds, for example. Selection and breeding might lead to practical improvements such as higher yields, fewer losses, and stronger animals. Such improvements provide feedback for analysis, but even futile readjustments render new insights. This process is continuous and results in learning and in new knowledge.

“Peasant farming is a permanent search for improvements, novelties, knowledge and  progress”

Routine is a mighty tool when farming in a sea of uncertainty. What proved to be useful and reliable in the past will be the compass for today’s activities. But even so, alongside routine there is always curiosity and the unbeatable drive to do things better. Curiosity and drive trigger cycles of observation, interpretation, readjustment, evaluation and learning. This makes peasant farming a permanent search for improvements, novelties, knowledge and progress. Historically, the many small improvements on peasant farms added up to a steady and sustained growth of production. It wasn’t untill peasant agriculture started to get heavily squeezed and its development potential appropriated by others that growth rates diminished until misery abounded.

The art of farming

A well-balanced farm functions as an assurance. It is a promise for the future and a source of feedback. The different levels and the associated balances are clearly interdependent. Together the different criteria compose the ‘moral economy of the peasantry’: determining, in their view, how things should be. These criteria are especially activated if and when things strongly differ from how they should be. The many cycles and the capacity to bring them into balance with each other are the ‘art of farming’ (see book review of ‘The Art of Farming’).The learning cycles of observation, interpretation and readjustment are not individual activities. They are socialised through exchange and communication between peasants and often involve comparisons that go beyond the individual farm. 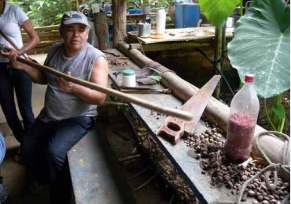 In this process, peasants use criteria in order to assess what is better and what is worse. These criteria are never one dimensional, they are rather multifaceted. When it comes to potatoes, for instance, peasants assess taste, storability, performance in the given ecological conditions, appearance, yield, and resistance to pests and diseases. Interestingly, aesthetics are among some of the most important criteria. ‘Healthy looking’ plants, ‘beautiful’ crops, ‘generous’ fields, and ‘noble’ cattle are unambiguous concepts amongst peasants.These criteria are used at multiple levels. Some regard the fields and the animals, others regard the farm as a whole, and yet others regard the community and sometimes even the equilibrium between the agricultural sector and society as a whole. The different balances within the family, between family and farm, between land and animals, between past, present and future also contribute to the aesthetics of the farm.

“It often allows those involved to emancipate, to move forward, to develop themselves as active and knowledgeable actors.”

Together they explain why peasant agriculture has historically resulted in ongoing growth and development that is ‘born from within’ or in other words endogenous development. It also explains why peasant farming is often attractive: it is a journey of discovery, a search for new possibilities and it often allows those involved to emancipate, to move forward, to develop themselves as active and knowledgeable actors.

Contrary to what those making profit from industrial agriculture have us believe, in industrial agriculture the issue of evaluation of the farm is relatively simple. Yields, input use and incomes are assumed to run in parallel. High input use is a prerequisite for high yields, and high yields will lead to good incomes provided the farm size is adequate. This fits well with how the wider global economy is currently organised as high yields ensure that enough raw materials are made available for the food industry, large retail and export, and high input use creates a market for upstream agribusiness such as the seed and chemical industries.If the ‘clean part’ is acceptable to peasants then the agricultural sector is likely to be sound.

Although in industrial agriculture such cycles are not completely absent, they have been moved to the margins of the labour process. To begin with, farms have been reduced from diverse wholes to highly specialised units of production that basically convert external inputs into specified output for the food and retail industries. Unlike in peasant agriculture, land is no longer the main resource but has been reduced to the venue where agriculture takes place. Second, the labour process now follows a script written by outsiders. Third, specialisation and standardisation have strongly reduced, if not nearly eliminated, heterogeneity in and between farms, rendering comparisons rather useless.

As a result, in this type of farming there is hardly any interest anymore in careful observation, interpretation and readjustment. Growth is now paramount. Development is now exogenous (originating from outside). Modernised agriculture critically depends on the application of resources obtained on the capital market, on the use of external technologies, on knowledge developed elsewhere, on external organisational schemes and logistics and even on the use of external labour. Yield increase of a single crop has become the main indicator of success. The many problems that have resulted from this type of farming are well known.

Alongside industrial agriculture there remain, both in the global north and the global south, large and growing segments of peasant agriculture. This is in part thanks to the agroecological movement.

Agroecology reorients farming towards less use of external inputs and improved efficiency of internal resources. Agroecology is, in many respects, about returning to and strengthening peasant farming. It explicitly socialises the processes of observation, interpretation and readjustment through farmer field schools, farmer-to-farmer learning, field visits, experimentation, etc. These types of learning methods are also applied to new issues such as health, animal welfare, climate change, gender equality, product quality, nutrition, and marketing.

A beautiful production and a well-balanced farm result in an adequate livelihood, in well-being and in prospects for the future. While incomes are an integral part of all this, peasant farmers perceive income in a very specific way. They are not interested in profits or in the ‘net farm results’ as calculated in standard farm accountancy. As very clearly argued by the Russian scholar Chayanov, incomes are perceived by peasant farmers as the result of their labour (as ‘labour income’). They typically do not calculate their own labour and other internal resources as costs.

Strategic for peasant producers is the difference between sold produce and bought inputs; this is often referred to as ‘the clean part’. This income is regarded as ‘clean’ because it is for the peasants and their families themselves. Together with the food produced for the household, it cannot be touched or claimed by others. The concept of the ‘clean part’ was developed by peasants in order to be able to evaluate and control the relation between their farms and the markets. It connects the dynamics in the fields and stables with the well-being of the family.

Assessing the ‘clean part’ is a powerful tool for agroecology, precisely because it highlights the result of a particular double movement that is central to agroecology: reducing external input use and the associated costs, while obtaining better prices for their products. The latter takes place through organising peasant agroecological markets, augmenting quality and adding value, and creating cooperatives. Peasant producers and their families will always ask: how does this income or ‘clean part’ relate to the time, effort and energy we have invested in the labour process?

“There is a particular double movement in agroecology: reducing external input use and the associated costs, while obtaining better prices.”

The ‘clean part’ may also translate to agriculture as a whole: If the ‘clean part’ is acceptable to peasants, then the agricultural sector is likely to be sound and not in need of perverse subsidies. It means that agriculture will be able to finance its own further development. The agroecological transition has shown the potential to generate a ‘clean’ part that is both acceptable for individual farmers and able to generate benefits to society as a whole.

If citizens, social organisations, researchers and policy makers are able to apply a similar view when assessing the dynamics and impacts of different types of farming, they will be able to strongly contribute to making clear, to society as a whole, that peasant-led agroecology is not only a promise but equally a necessity for today and for the future. 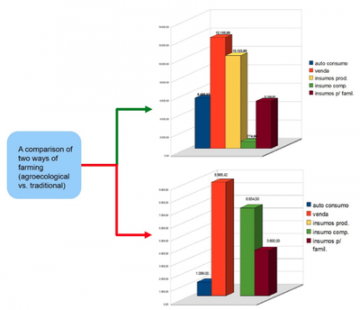 On the agroecological farm above), there is considerable production for the market (venda) alongside production for consumption in the family (auto consumo). Production is mainly reliant on internal resources that are produced and reproduced within the farm system (insumos prod.) and external inputs (insumo comp.) only play a minor role. Thus the ‘clean part’ is considerable (11,326 Reais or US$ 3611). This allows for a good level of expenditure for the family (insumos p/ famil.) and for savings, as the clean part is larger than family expenditure.
In contrast, the specialised farm strongly depends on external inputs. In this respect Aldo’s is indeed a conventional farm where the reliance on external inputs is much higher than in the agroecological farm. The clean part, however, is much smaller and so are self-consumption and family expenditure. Consequently, in the agroecological farm people are better off than in the more entrepreneurial farm that heavily depends on industrial inputs.

Jan Douwe van der Ploeg (jandouwe.vanderploeg@wur.nl) is Adjunct Professor in the sociology of agriculture at the College of Humanities and Development Studies at China Agricultural University in Beijing.

This article was first published in Farming Matters, September 2016