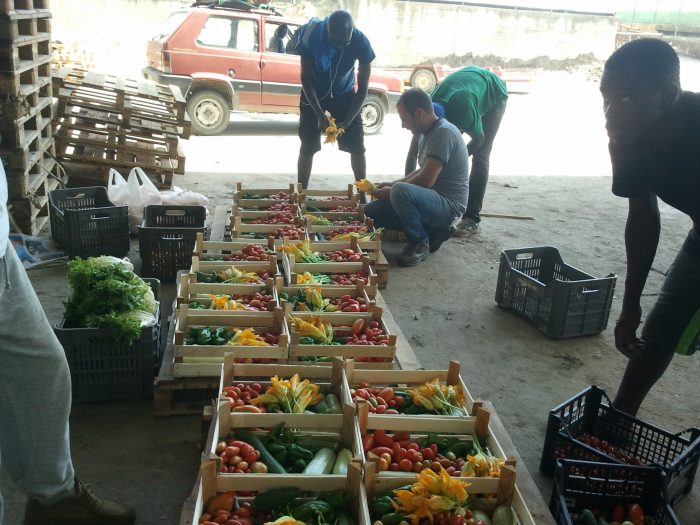 While much of the production of food in Europe depends on migrant workers, most people are not aware of the terrible working and living conditions that most of them have to endure. At the same time, the plight of small scale producers who must deal with the low prices imposed by large retailers, also goes unnoticed. In Calabria, South Italy, small scale producers and migrant workers are coming together to practice ethical agriculture.

Ibrahim Diabaté, one of the two authors of this article, came to Italy from the Ivory Coast nine years ago as a legal migrant, to study agriculture. His plan failed, so he worked in factories, moved to different cities, and eventually ended up in Calabria, harvesting mandarins and oranges. Similarly, many other migrants, both legal and illegal, have moved to the area to find work. Most of them live in terrible conditions, in the cold, enclosed in ghettos and earning very little money.

Meanwhile, citrus growers are receiving eight cents per kilo for their oranges. Even small scale producers can’t afford to pay for labour with the price theyreceive for their produce. Sadly, exploiting their workers has become a default solution for many.

At the beginning of 2010 the immigrant population in the city of Rosarno, an important agricultural centre in Calabria, rose up after two migrants were injured and to protest the shameful conditions in which they were forced to live. Ibrahim was involved in an anti-racism committee at the time.

He moved to Rosarno where he got in touch with some locals who were helping migrants by providing food and basic goods. From this point, a synergy emerged between the two groups that resulted in the creation of SOS Rosarno, first as a project, then as an association. SOS Rosarno brings together land labourers and small producers suffocated by the prices imposed by large retailers. The association includes 15 small producers that work with citrus, olive oil and honey, as well as artisans, and people working in the cultural sector, and 30 to 35 migrant workers. These migrants used to be engineers, electricians, drivers, or accountants in their homelands.

Together, they aim to achieve adequate and ethical wages, for farm workers and producers alike, that respects the minimum standards. To do this they have created a direct relationship between farmers and citizens (not ‘consumers’) through about 400 existing ethical-purchase groups across the country. An important feature of the groups is the ‘transparent price’ that is available for everyone online. That way everyone can see which fractions of the money pay goes to who and covers which costs.

Out of SOS Rosarno, a social cooperative was created, Cooperativa Mani e Terra (hands and land), by five Italians and seven migrant workers, each with equal rights when it comes to decision making. The cooperative has been renting five hectares of land for the last two years for winter and summer production. They sell their produce on the spot, either to the ethical-purchase groups or to restaurants in the area. This way they provide an alternative to the big retailers.

Through their farming they are making a political statement: ‘Ethical agriculture’ is diversified, organic, and with fair prices. They define this as caring for the land and practicing human-based agriculture that is not for profit. Foremost they farm to sustain themselves and then to provide a good product for those who consume it. Wealthy people should not be the only ones eating good food.

The cooperative works for diversification and they want to fight the new racism that’s been emerging in Europe. They are proving that it is possible to break the linguistic and cultural walls established between locals and migrants.

A drop in the ocean

Also, there is not enough demand for organic products in the area. This is especially the case for oranges that require more labour for harvest. This creates additional costs and prices that neither small scale producers or less wealthy citizens can afford. So still today, most of the organic oranges are pulped and sold at a loss to big organic retailers, or thrown away.

There are about 3000 immigrants in the Gioia Tauro plain of Calabria with no home, no job and no food. Employing seven or 30 of them is not a big change. But it sets an example. SOS Rosarno is collaborating with different networks in the country, such as the Italian Rural Association (ARI) and Fuorimercato, which works with direct distribution of agricultural produce to cities all over Italy, with a focus on workers’ rights and the environment. We are only a drop in the ocean now, but there is an existing web of people building a solidarity-based economy that could grow stronger.