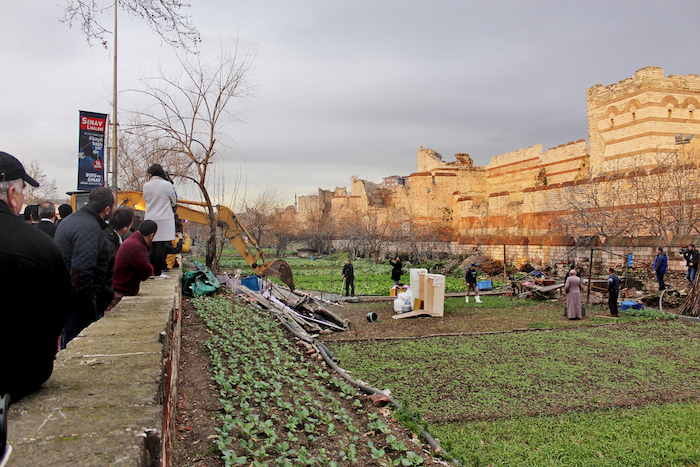 Istanbul, like many other cities, is under heavy pressure from urban development projects. In the face of this threat, the DÜRTÜK collective supports small scale farmers in and around Istanbul by organising reliable demand for the produce from urban gardens, and by building a supportive community around them. This initiative not only provides urban residents with local and fairly priced vegetables, but is also a line of defence against the destruction of the city’s historic vegetable gardens and a space of action in Istanbul’s violent, paralysing atmosphere.

Every Monday our collective makes a list of vegetables available from local farmers, sets fair prices, and collects orders from our members. We also talk about the most urgent developments concerning the vegetable gardens, which are under constant threat from urban transformation projects. On Thursdays, we bring the produce to a central district of Istanbul where members can pick up their orders and socialise amongst themselves.

DÜRTÜK is the acronym for Producers and Consumers in Resistance (Direnen Üretici Tüketici Kolektifi in Turkish). It also means the poke or the poked, which we consider a modest and fun expression for motivating each other to take action. The DÜRTÜK collective was born in 2015 as common ground between the struggle for urban spaces and the emerging food sovereignty movement in Istanbul.

In 2013, protests erupted all over Turkey in response to the violent dismantling of demonstrations against development plans that would destroy the Taksim Gezi Park, one of the few green places in the city. The protests brought together a rich multiplicity of people and groups opposing the enclosure of public spaces, destructive urban transformation projects, the ecological devastation, as well as ongoing state oppression and violence.

After the ‘Gezi Resistance’, the emerging movement continued to be active in neighbourhoods in the form of discussions, protests, solidarity events, open markets, workshops, community gardens and informal food coops. DÜRTÜK was born in this process, bringing together different experiences, actors and desires.

It is very difficult, and in fact painful, to look back now and reflect on the expectations, emotions and desires that we had at that time. It is painful, because over the past two years oppression and violence in Turkey has grown beyond our imagination.

The war in Syria, the bombings by ISIS (Daesh), the termination of the peace process in the Kurdish region of the country by the Turkish state, and the attempted coup in 2016 have generated political polarisation all over the country. Journalists, academics, teachers and politicians are being imprisoned, cities and neigbourhoods burnt, and many lives lost. Schools, streets and public squares lost their liveliness. Our hopes, our imaginations, and even our mobility, have shrunk.

Persevering with the seemingly modest activities of DÜRTÜK has been significant in overcoming this paralysis. It not only supported the producers but also kept us going, as activists, consumers and citizens in trying to create spaces of solidarity.

DÜRTÜK cooperates with the small scale orchards and vegetable gardens situated in central Istanbul known as bostans that are run by professional farmers. They grow green, leafy vegetables and herbs that can be harvested various times a week. The farmers sell to (and at) open markets, restaurants and grocery stores, as well as through DÜRTÜK, and directly from the bostan. Their cultivation methods are a combination of those inherited from generations of gardeners before them and other techniques.

While today only a few remain active, historically the bostans of Istanbul helped feeding the city. In fact, people depended on these gardens for survival during wars and famines. Today they are considered a nostalgic memory that is irrelevant to urban life. But nothing could be further from the truth. In recent years, bostans have convened people in defence of cultural heritage, the right to the city and urban food production.

The Land Walls: Defending and feeding the city

One of the producers we currently work with is Özkan Ökten. He works in a bostan in the moats of the ancient fort of Byzantium, called the Theodosian Land Walls of Constantinople, recognised as UNESCO World Heritage. Özkan, in his 40s, is also the head of a non-profit that aims to sustain the old and new bostans of Istanbul and supports the working conditions of its farmers.

Özkan and around 20 other families make a living by cultivating the moats of the Walls. They are the second or third generation of farmers who have migrated to Istanbul to earn a living. This history of agricultural activity around the Land Walls is deeply tied to the history of the Walls, which dates back to the fifth century.  As such, the Walls and the bostans together represent great urban know-how about both defending and feeding the city.

Gardening continues to be the most consistent activity in the moats and around the walled zone. Although this is keeping the area lively and productive, it is neglected both as a means to conserve the area and as cultural heritage. In recent years some of the very old and active bostans in the same area, known as Yedikule Bostanları, were destroyed by the municipality to make way for a park that will serve the surrounding gentrifying neighbourhoods.

The Mosque Garden: Threats and resistance

One active but endangered bostan of Istanbul is Piyalepaşa Camii Bostanı (Piyalepaşa Mosque Garden), which was supposed to become a car park in 2013. Mehmet and Cemile, acouple in their 60s, struggle to keep the bostan going in the middle of the rapidly transforming centre of Istanbul. The bostan’s history is closely related to that of the mosque, having been a source of income for the mosque since the 16th century. An unlikely alliance of activists, lawyers, archeologists and historians stood up for its protection, and with success. Not only was Piyalepaşa Camii Bostanı saved from becoming a car park, it was also registered as a historical heritage landmark in 2015.

This has been an exemplary case in Istanbul of how agricultural land can be recognised as cultural heritage. But the municipality and associated construction companies are continuing to put pressure on Mehmet and Cemile to move somewhere else. The latest rumour is that the bostan will be turned into a hobby garden for the municipality so that they can make a profit from it.

The near future of this bostan is uncertain for other reasons as well. Mehmet and Cemile are old and they do not have enough strength to cultivate all their land. Because of the low prices of agricultural produce, and the equally low social status of farming in Turkey, their children do not have an interest in keeping the business going.

No recognition, no security

Urban development speculators breathing down their necks is not the only worry for farmers like Mehmet and Cemile. Although the bostans are quite central in the city and are surrounded by residential areas, the farmers struggle to get fair prices for their produce. The problem is that they cannot compete with the prices of imported, industrialised food.

Moreover, despite the fact that the farmers have been cultivating their land for generations, their land tenure is insecure and they can be evicted at any moment. The land they cultivate is not considered agricultural land so they cannot formally register asfarmers. This means that they are not recognised in agricultural policies and don’t get access to public social security programmes. Combined, all these precarious conditions make the farmers in bostans hesitant to make long term investments in the soil.

Taksim, where we have our base, has been the scene of many political demonstrations and marches. It is a historically loaded place. Demonstrations are banned now, and a state of emergency has been in place since the attempted coup in 2016. Police are everywhere and constantly present. This has made many people afraid of coming to Taksim, which limits the growth of our orders. We haven’t been able to hold big meetings in the past year, and we are also having difficulty finding volunteers to invest time in DÜRTÜK‘s operations and activities.

But even if there are not many weekly orders, we are continuing. We are trying to organise events and keep the discussion alive on how to continue and develop the organisation. We discuss food sovereignty in an international context, and talk about themes such as Community Supported Agriculture models in different countries and alternative economies. We organise picnics and participate in solidarity markets to find new members. We come together with other organisations to discuss issues and to gather strength.

The weekly routine of DÜRTÜK’s meetings represents hopeful, common ground for gardeners, farmers, consumers, activists and other citizens to exchange experiences about how they cope in their precarious situations, and to support each other. At DÜRTÜK, the urgent need to save and to defend agricultural spaces meets the humble labour of cultivating and reproducing everyday life.