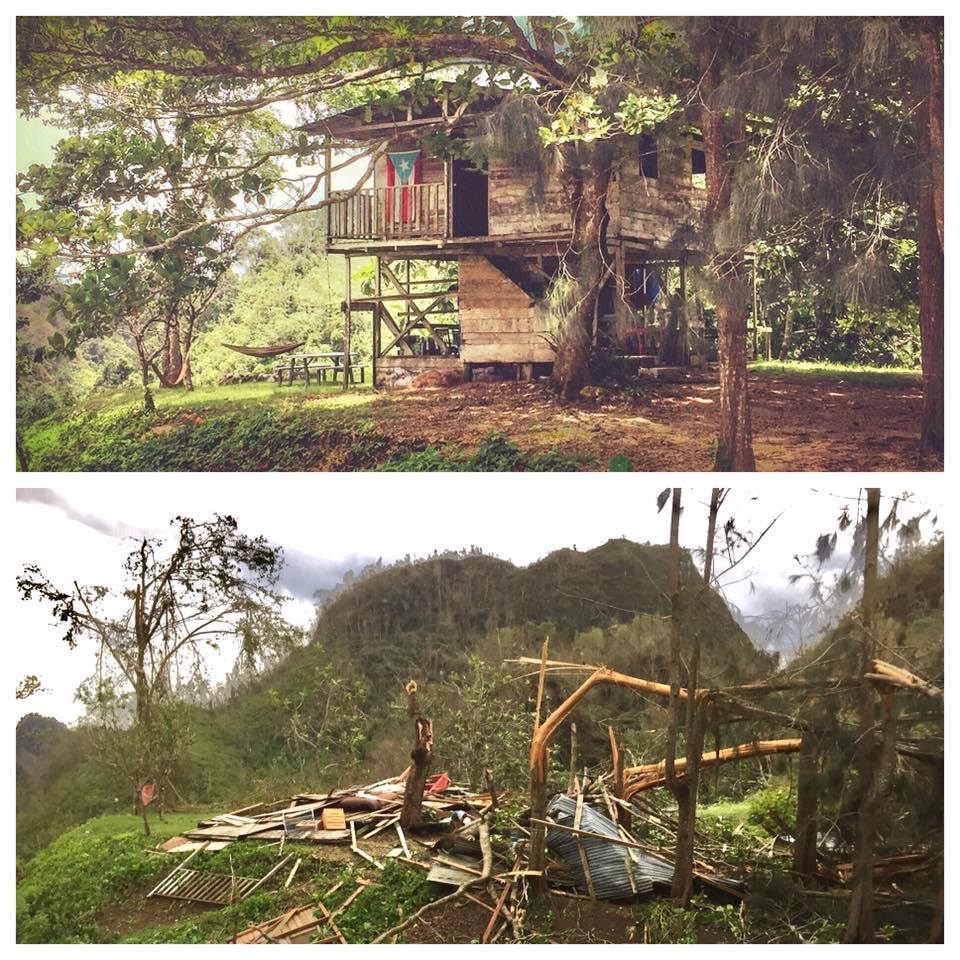 When Hurricane María slammed into Puerto Rico on September 20, 2017 it pushed the beleaguered island from crisis to disaster.  Farmers, farm workers and solidarity activists are now re-constructing the future of Puerto Rico, starting with the food system. Find out what you can do at the bottom of this page.

While the government of Puerto Rico has historically invested in biotechnology and industrial agriculture for export, this model has failed our food system. Now, in our time of need, social movements in rural and urban communities are organising in brigades to rescue what is left of Puerto Rican agriculture.

The hurricane’s 150 MPH winds destroyed Puerto Rico’s trees, electricity, roads, bridges, and farms. There were no working hospitals, no fuel, no water, no power, no airport… and no food. The scale of the destruction and the suffering are unprecedented. Nonetheless, the disaster was entirely predictable.

The structural readjustment imposed on the economy gutted health care, education, and infrastructure, and privatised public services—the very ones that were unable to deliver critical relief services following the hurricane, causing a tragic humanitarian crisis.

We need to grow our own food

Food was a challenge in Puerto Rico before Hurricane María. Over 85% was imported. The Jones Act, a colonial legislation that requires all cargo into Puerto Rico be transported on US ships, ultimately doomed the island to high food prices and led to billions of dollars in lost trade revenues. Our dependency increased our vulnerability, exposing us to high risk in the face of the growing economic shocks and severe weather battering the globe.

President Donald Trump waited a full week after the hurricane to suspend the Jones Act, effectively blocking urgently needed food and supplies offered by Venezuela and Cuba. The Jones Act should not just be suspended, it should be repealed. Our unpayable debt should be forgiven. How can we rebuild the island under this weight?

Before the hurricane, the Puerto Rican movement for food sovereignty was slowly growing with local farmers and budding farmers’ markets. More than 150 food activists were trained in agroecology. In the midst of tragedy we have found an opportunity to rebuild our island’s food system—sustainably and equitably. The ground is fertile for an agroecological transformation.

Due to the state government’s almost complete absence of support towards ecological farming, farmers, farm workers, and food sovereignty activists have learned to persist and recover against all odds. In 2018, they organized a month-long series of mutual support brigades, Brigadas de Apoyo: Agroecología, Reconstrucción y Justicia Climática. At the same time the Guagua Solidaria kicked-off its own seed, reforestation, and farmer brigades in urban and rural agroecological projects, targeting the first few farms of two hundred they will support throughout the next two years. These campaigns were organized with people from all over Puerto Rico, and from representatives of social justice and farming collectives from Eastern and Western US states, Canada, Central America, and Europe, including myself from Cultivate!. These brigades followed months of impromptu, voluntary immediate relief brigades in which members of these organizations engaged to support farmers and their communities. The brigades were held in the format of moving camps, spending 3-4 days in each farm rebuilding farming structures, houses and planting. These brigades incorporated spaces for political training, dialogues, workshops, cultural exchanges and reflection while promoting active group participation during the process.

This work is still taking place, but does require more support. Exchanges like these not only help farmers get stabilised and better positioned to confront the next hurricane season(s), but also help bolster the movement work of organisers, educators, activists and farmers that often spills over beyond a farm’s perimeters into diverse communities and across many issues.

Hurricane María exposed the political, social and environmental vulnerability of Puerto Rico and the Caribbean. It’s time to re-construct our future, starting with the food system. Emergency relief was the first step, but long-term resilience needs to be planned and managed going forward. Agroecology is the tool.

Watch Georges Felix speak (through a video connection) at a public event organised by Food First in Berkeley, US on 18 October 2017 with the title “Disasters, Agroecology, and Decolonial Reconstruction in Puerto Rico”.

Also by Georges Felix and others: ‘Puerto Rican Ecofarms after Hurricane Maria: Bouncing back with a little help from our friends’ (March 2018)

Georges Félix is a co-founder of Cultivate! He is also a Puerto Rican food sovereignty activist, linked to the Organización Boricuá de Agricultura Ecológica and SOCLA Puerto Rico and a PhD candidate at Wageningen University (NL), doing research on agroecology with farmers in Burkina Faso .

https://fondoderesilienciapuertorico.tumblr.com/materiales
Food sovereignty collective to support both agroecological and conventional farmers in (1) emergency relief and (2) transformation towards agroecological food system. This fund is managed by Tara from El Departamento de la Comida in coalition with farmers, activists and artists

www.casapueblo.org
Non-governmental organisation leading relief and recovery operations in the rural and mountain areas of rural Puerto Rico for over 20 years. As an immediate action after hurricane María, Casa Pueblo is investing in solar power solutions.

This text was simultaneously published by FoodFirst